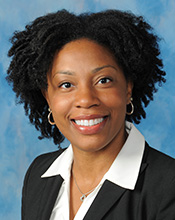 Stefanie Jean-Baptiste Berry, MD, is board-certified in neurology and epilepsy. After earning a Bachelor of Arts in neuroscience and behavior at Columbia University, she earned her medical degree in 2005 from Mount Sinai School of Medicine in New York, New York. Dr. Berry completed her residency in pediatrics in 2007 at Schneider Children’s Hospital in New Hyde Park, New York, where she also completed a fellowship in pediatric neurology in 2010. She then completed a fellowship in pediatric epilepsy, EEG and neurophysiology in 2011 at Weill Cornell Medical Center at New York Presbyterian Hospital in New York, New York.

From 2011 to 2015, Dr. Berry served as a member of the professional advisory board of the Epilepsy Foundation of Northeastern New York in Albany and as an attending physician in pediatric neurology, pediatric epilepsy and EEG at Northeast Regional Epilepsy Group in Middletown, New York. From 2012 to 2015, she also served as an adjunct clinical assistant professor of Child Neurology at Touro College of Osteopathic Medicine in New York, New York.