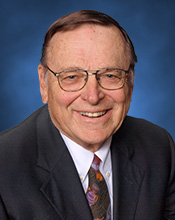 Dr. Paul Benke is Director of Clinical Genetics at Joe DiMaggio Children's Hospital. He earned his medical degree at the University of Pennsylvania and his PhD from the University of Wisconsin at Madison, where he received his pediatric training, and was a research fellow supported by the National Institutes of Health. Prior to joining Joe DiMaggio Children's Hospital, Dr. Benke was the director of Clinical Genetics at the University of Miami School of Medicine, where he also served as associate professor in the department of biochemistry and molecular biology. He is the senior geneticist in practice in South Florida.

Dr. Benke is the most experienced geneticist in South Florida. He has experience caring for patients in the clinical genetics setting as well as participating in numerous research studies, publications, educating future doctors and other academic endeavors. Dr. Benke has discovered various genetic conditions including Cayman Ataxia, X-linked Leigh's Syndrome, a recessive form of Adrenoleukodystrophy, and more recently SLC5A6 Related Disorder. He was also involved in describing the initial cases of Pallister-Hall Syndrome. While completing his PhD work he was the first to discover the devastating harmful effects of Accutane in pregnancy and performed extensive research studies on Lesch Nyhan Syndrome.

Dr. Benke's love for learning and genetics will never cease. He continually attends the American Society of Human Genetics annual meetings and stays current on new developments and treatments in the genetics field. He has appeared on the TV show “Mystery Diagnosis” as well as CNN. He has been named one of America's Top Doctors in addition to Florida's Top Doctors, among other accolades.

His favorite past time is discovering treatable genetic basis for autism and other neurodevelopmental disorders. Nothing makes Dr. Benke happier than being able to provide a potential medical solution to a patient's concerns. While sometimes genetics can sound like a foreign language, Dr. Benke is there to explain everything to you and support you throughout the genetic evaluation and diagnostic process.

When Dr. Benke isn't in the office he enjoys spending time with his wife, daughters and grandchildren. He is still an active cyclist and enjoys sports and country music.