Ironically, not only do colleagues call her the “DCF Queen” for her in-depth knowledge of the system, but she fostered and adopted two children on her own. The moral: Never say never.

“I’m a single parent. I chose to do this by myself,” says the mother of a boy, 5, and girl, 4. “I chose to do it because I know there are so many kids that need good foster homes.”

Born and raised in Chicago, Diana says she always aspired to be a school social worker. She earned her master’s degree in social work at Loyola University. After graduating, she longed for an experience that would push her out of her comfort zone. Instead of venturing into Chicago’s school system, Diana found herself in California doing exactly what she swore she’d never do.

“The positions available in California were pretty much only in foster care, so I took a huge leap. I said, ‘If I want to be in California, I’m going to have to expand my horizons.’ I ended up loving it,” she says.

She learned California’s foster care system inside and out before moving to Florida, where she embraced another huge change and became a foster parent to a boy with serious medical issues. In 2013, her then-foster son spent months in the NICU and ICU struggling with respiratory issues, cardiac surgery and craniofacial surgery.

“I wouldn’t leave his bedside. As a result, I met a lot of people, including several in the social work department. Months passed, and they reached out to me with a job offer,” Diana says.

Diana has been the pediatric licensed clinical social worker for JoeD’s medical/surgical floors and the step-down ICU since 2014. She also handles many of the trauma/child abuse cases – hence her unofficial royal title.

“I do mostly the DCF cases here because I know what these kids need and I have to advocate for them,” Diana says. “Whether it’s in the hospital or the community, I feel like I’m their voice to make sure they’re protected.”

Not long after she brought her son home, Diana fostered another child with special needs. Then, she started the adoption process. She calls these babies her “heroes” and “miracles.”

“It was a very long journey for both kids, but they both needed permanent homes because they couldn’t return to their family. There was no question that they were going to be adopted by me. Thankfully, because of this position and previous positions, I’m able to provide the resources they required from birth on to make sure they reach their fullest potential. I live it, breathe it, work it, love it,” Diana says.

And so she remains on the list to foster other children. She also facilitates online support groups for surrounding counties and mentors foster and adoptive families to navigate the medical environment for kids with special needs. She’s very open about our story because she hopes it will encourage others to consider following suit. Her colleagues, she says, possess the qualities DCF looks for when placing children.

“I absolutely love who I work with. It’s a huge family and everybody is so supportive,” she says. “My doctors really respect their social workers, and that’s huge. I’m honored and lucky to be where I’m at.” 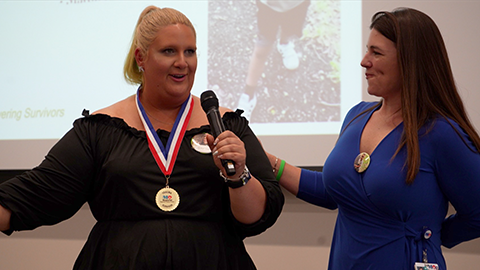 Former trauma patients shared their stories of gratitude with the adult and pediatric trauma teams that saved their lives.